The Rev. Derrick Hill was born in 1966 in Trussville, a suburb of Birmingham, Alabama, and lived there most of his life. As a child, he was baptized at the First Baptist Church and remained an active member until graduating from Hewitt-Trussville high school in 1985. Derrick went on to earn a degree in civil engineering from Auburn University. Upon graduating, he returned to Birmingham, received a masters in public and private management from Birmingham Southern College, and worked as a civil engineer for 18 years (the last 8 as president of the Hill Engineering Group). During his time in Auburn (1985-1990), he discovered the Episcopal Church and was confirmed in 1992 at Holy Cross in Trussville.

Prior to entering the discernment process for ordained ministry, Derrick was actively involved in the leadership of his parish where he taught classes, mentored EFM, served as a member of the vestry and as a lay Eucharistic minister/visitor.

He received his Masters of Divinity from the School of Theology at the University of the South in Sewanee. From June 2011 until his appointment as Rector at St. Timothy's in 2015, he served as Assistant to the Rector at St. Mary's on-the-Highlands in Birmingham. While at St. Mary's, he was involved in many ministries, but his focuses were pastoral care, outreach, strategic planning, and adult formation through education and Cursillo.

Derrick married his wife, Beverly Hurley Hill, at St. Stephen's Episcopal Church in 1998. Beverly is a lifelong Episcopalian and currently works as the Lay Ministries Coordinator for the Episcopal Diocese of East Tennessee. 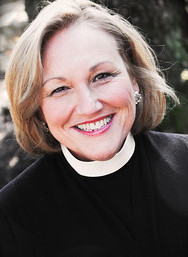 The Rev. Taylor W. Dinsmore is a native of Cleveland, Tennessee, where she and her family were members of St. Luke's Episcopal Church. College, work, marriage, and children found Taylor settling down in Chattanooga, where her family became active members of St. Paul's Episcopal Church downtown. It was from there that Taylor entered the ordination process and left to attend the School of Theology at Sewanee in 2002. While in seminary, she continued to work as a part-time chaplain at Alexian Village. Upon graduation with a Master of Divinity with Honors, Taylor became Assistant Rector at the Episcopal Church of the Good Samaritan in Knoxville, Tennessee, where she remained for almost 11 years. While there, she was involved in all areas of parish ministry. She particularly was involved in preaching, teaching, and pastoral/healing ministry. She was a member of the board of the Volunteer Ministry Center, board of Bridge Refugee Center, EFM mentor, and Hope Center Volunteer and Advocate for persons living with HIV. In the summer and fall of 2012, at the request of Bishop Charles vonRosenberg, the Provisional Bishop in South Carolina, she worked with the people of St. Mark's church in Beaufort, South Carolina, as they moved toward mission and then parish status.

Taylor recently returned to ministry in the Chattanooga area when she accepted the position of Associate Rector here at St. Timothy's and began her work on May 1, 2016. She is a member of the Bishop's Committee on Music and Liturgy and the Standing Committee for the Diocese of East Tennessee. She also teaches Homiletics in the Diocesan Licensed Lay Ministry Program. For the next few summers, Taylor can be found at Sewanee working on her Doctor of Ministry Degree at the School of Theology.

She is married to Ervin Dinsmore, who served in the Chattanooga Police Department and as the Administrator of Public Safety for the City of Chattanooga. They have four children and six grandchildren.

She loves reading, writing, painting, and playing with her 6-year-old namesake granddaughter keep her busy. Target and Sewanee are her happy places.